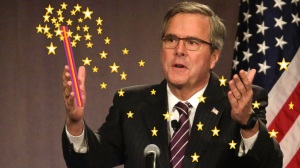 Jeb Bush using a magic wand to fix the Constitution and to make the U.S. Gross Domestic Product grow at 4% as he promised earlier.

Although the signature section of the Constitution isn’t used to establish any laws, it would be fair to make some adjustments there, as well, so…

Since we’re fixing the Constitution already, is there anything else you want changed once Jeb gets his magic wand?

An Ostensibly Funny Commentary* of the Recent News and Events. (* warning! may not actually be funny or a commentary. Also, since I am not quite sure what "ostensibly" means, it might not be "ostensibly" either.) Blogging at listofx.com
View all posts by List of X →
This entry was posted in Humor, List of 10, Satire and tagged 1st Amendment, 2nd amendment, Constitution, elections, humor, Jeb Bush, magic, Political satire, Politics, Republican Party, satire, United States. Bookmark the permalink.