10 Reactions To Release Of American Soldier Captured By Taliban 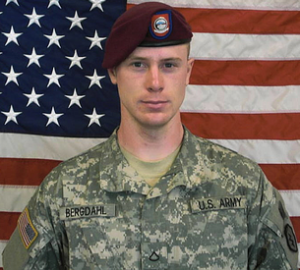 Bowe Bergdahl: the only American soldier captured in Afghanistan, and the only soldier in history that was hailed as a hero while in captivity, then called a traitor once he was freed.  Image source: Wikipedia

Last weekend, Barack Obama had announced that Bowe Bergdahl, the sole American soldier captured by the Taliban in Afghanistan and held captive for the last five years, has been freed in exchange for five Taliban commanders released from Guantanamo military prison. (There is, apparently, an exchange rate of one Taliban commander for one year in captivity). Normally, a return of an American POW would be a cause for a celebration. Instead, the White House was criticized for negotiating with terrorists, for bringing back a suspected deserter, for not notifying the Congress 30 days before the swap, and so on. Here are 10 other reactions to the prisoner trade and return of Bowe Bergdahl.

2) John Boehner, Republican Speaker of the House: “Barack Obama broke the law by not notifying the Congress 30 days in advance before the swap! This illegal action gave us no ANY time to leak classified information to the media before it was too late! And by the way, Obama keeps breaking another requirement to notify Congress 90 days in advance before he sneezes!”

3) Sloan Gibson, Interim Director of Veterans Affairs Administration: “We’re happy to welcome Sgt. Bergdahl home, but considering VA’s problems with long wait for medical care, we ask him to be very, very patient and prepare to spend next couple years waiting for one of our specialists. In fact, we think that Sgt. Bergdahl would probably receive a speedier medical assistance from the Taliban.”

4) Fox News, Republican PR agency: “Liberals love to point out that George W. Bush released more than 500 prisoners from Guantanamo while Obama released five. What they don’t talk about that it was Obama’s fault anyway – Obama must have convinced Bush to release these detainees so that he could blame Bush for releasing them!”

5) Sarah Palin, unemployed woman with a Facebook account: “Our country does not negotiate with terrorists! Just look at our history, and you’ll see that not a single Founding Father has ever negotiated with the Taliban!”

6) Barack Obama: “We followed our motto ‘Don’t leave a man behind’ and brought Sergeant Bergdahl back. And our country did not break the principle of not negotiating with terrorists, because the Taliban is not designated as a terrorist organization. It’s not like they try to sabotage almost every single government agency, or shut down the government, or leave tens of millions of people without any health insurance.”

7) Chuck Hagel, US Defense Secretary: “‘Don’t leave a man behind’? What ever gave people the idea that our country follows the principle? There’s still 30,000 troops left in Afghanistan.”

8) Pew Research Center: “Based on the results of our recent poll on whether Americans think that Bowe Bergdahl is guilty of treason and should never have been brought home, we have determined that nearly 30% of Americans possess a supernatural ability to tell with absolute certainty whether a person is guilty of committing a crime without actually seeing any evidence or even reading the law.”

9) John McCain, former prisoner of war: “Those Taliban commanders are extremely dangerous and should have never been released! They deserve the most severe punishment imaginable, like housing them on a tropical island and feeding and entertaining them on the taxpayers’ dime!”

10) Sgt. Bowe Bergdahl: “I’m just happy to be home, and… Wait, what are they are saying what about me? Really? And now my family is getting death threats? Well, thanks for reminding me why I wanted to defect in the first place. “

An Ostensibly Funny Commentary* of the Recent News and Events. (* warning! may not actually be funny or a commentary. Also, since I am not quite sure what "ostensibly" means, it might not be "ostensibly" either.) Blogging at listofx.com
View all posts by List of X →
This entry was posted in Humor, List of 10, Satire and tagged Afghanistan, Barack Obama, Bowe Bergdahl, humor, Political satire, Politics, satire, Taliban, terrorism. Bookmark the permalink.