10 Reasons Why Russian Bombers Are Flying Near California 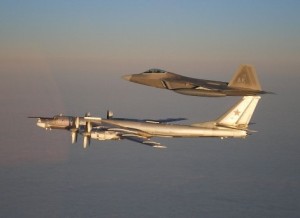 Last week, the U.S. Air Force intercepted two Russian bombers less than 50 miles away from the California coast. The bombers were accompanied by an aerial refueling airplane, apparently due to California’s ridiculously high gas prices. Here are 10 reasons why Russian bombers flew to California.

1) Vladimir Putin gave the order that this inane “Keeping Up With Kardashians” TV show must be stopped by any means necessary.

2) Facing possible sanctions on Russia for its actions in Ukraine, Vladimir Putin wanted to send a veiled threat to the United States by showing that Russian military still has two airplanes that are functional enough to reach American mainland.

4) It turns out that General Motors engine recall was a little more widespread than we thought.

5) Due to a still-unfixed Y2K bug in the bombers’ navigation system, the planes’ GPS loaded an 1814 map, according to which Russia has a military base in Northern California.

6) The planes did not intend to threaten the U.S.. They were merely delivering a shipment of steroids to the Russian soccer team playing in the World Cup in Brazil. Also, if necessary, the planes were meant to help the Russian players by leveling the playing field (or the whole stadium, if the opposing team just doesn’t get the hint.)

7) The planes were on a reconnaissance mission to verify a recently obtained top secret intelligence report: a high-quality two hour long video showing San Francisco being destroyed by couple of 100,000 ton dinosaur-like monsters.

8) Vladimir Putin sent the planes to protect the oppressed Russian-speaking Americans like Google’s founder Sergey Brin and actress Mila Kunis, and to check if any of the American states are ready to secede and join Russia.

9) Russian security forces got tired of dealing with the NSA leaker Edward Snowden and tried to drop him off back in the US.

10) The pilots were lost, and Russian military pilots never ask for directions. They just fly over the nearest land, then comb Twitter for hashtags #OMGRussiansAreAttacking” or #WorldWarThree to find out where they are.

An Ostensibly Funny Commentary* of the Recent News and Events. (* warning! may not actually be funny or a commentary. Also, since I am not quite sure what "ostensibly" means, it might not be "ostensibly" either.) Blogging at listofx.com
View all posts by List of X →
This entry was posted in Humor, List of 10, Satire and tagged California, humor, Russia, Russian bombers, satire, United States, US Air Force, Vladimir Putin. Bookmark the permalink.