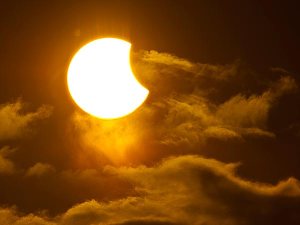 I wish I could have seen the eclipse myself, but I couldn’t due to extensive cover-up by the rainclouds – a conspiracy which surely went all the way up.
Image source: National Geographic

If you live in North America, you may have been able to see a partial solar eclipse this Thursday sometime around sunset. But if you had thought that the movement of stars and planets is governed only by laws of physics and cannot be explained by conspiracy theories, then you’re just not thinking big enough. Because on the Internet, you can explain anything with conspiracy theories – wars, climate change, economy, pandemics, so why should we believe that a planetary phenomenon really is what we are being told it is? So here are 10 conspiracy theories explaining the true reasons behind this week’s partial solar eclipse.

3)  This was an attempt by Apple Corporation to re-brand the sky as Apple’s proprietary iSky product, privatize it, and synchronize it with Apple’s existing iCloud software.

4)  It was Russia that made it seem like there was a solar eclipse during sunset to get everyone to look west, and invade us from the east while everyone is distracted and is looking the other way.

5)  The Sun trying to safeguard itself from the Ebola virus by using the Moon as protective gear of sorts.

7)  The eclipse was a PR gimmick sponsored by ExxonMobil and BP to prove that solar power is much less reliable than oil.

8)  It was the work of NASA trying to hide their cover-up of the Moon landing that never happened.

9)  American Association of Ophthalmologists was trying to trick millions of people to stare directly into the sun, thus causing severe damage to their eyes and billions in profits to their eye doctors.

10)  It may have been just a regular solar eclipse, but the real question you have to ask is when exactly Obama administration learned that an eclipse is imminent, and why haven’t they done anything to prevent it?

An Ostensibly Funny Commentary* of the Recent News and Events. (* warning! may not actually be funny or a commentary. Also, since I am not quite sure what "ostensibly" means, it might not be "ostensibly" either.) Blogging at listofx.com
View all posts by List of X →
This entry was posted in Humor, List of 10, Satire and tagged astronomy, Barack Obama, Conspiracy theories, humor, moon, satire, solar eclipse, solar eclipse 2014, Solar eclipse conspiracy. Bookmark the permalink.