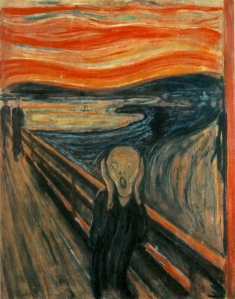 As most of you are already aware, West Africa is experiencing a severe Ebola outbreak, and a handful of Americans have been infected with Ebola virus as well. According to the experts, although Ebola is a real and scary disease, it’s not nearly as contagious as many other diseases because Ebola virus requires direct contact with bodily fluids of someone who is already sick to be transmitted. However, even though Ebola itself is not a threat to an average American, tens of millions of Americans have been suffering from acute irrational fear that an imminent Ebola outbreak would kill all of us. Or, to use the proper scientific term for this condition, from Ebolaphobia. For example, a school in Maine recently quarantined a teacher merely for visiting a conference 10 miles away from a Texas hospital that cares for Ebola patients. Here are 10 common symptoms you should check yourself for to determine if you’re suffering from Ebolaphobia.

1)  You break into cold sweat, and your temperature and blood pressure rise after watching several minutes of news reports on Ebola, but even considering the stress these news reports are causing your body, your organism keeps demanding new doses of Ebola-related stories.

2)  Without having received any formal medical training, you consider yourself a top expert on every kind of virus.

3)  Knowing that Ebola is normally transmitted through direct contact with bodily liquids, you have stopped wiping your nose and going to the bathroom.

4)  You don’t believe in evolution, but are confident that Ebola virus will doubtlessly mutate into an airborne germ armed with fangs and claws. So every five seconds, you check the sky to make sure that an airborne Ebola virus isn’t coming for your from above.

5)  You have purchased a 0.01-millimeter caliber rifle, so that when you do see an Ebola virus coming for you, you could shoot it in its fangy face.

6)  You think that a person’s dark skin, foreign accent, or a Texas driver’s license is a sure sign that the person has Ebola.

7)  You think we should ban direct flights from West Africa, because no person with Ebola is physically able to take a connecting flight through another country, or drive across the border, and because such flight ban will surely stop an airborne Ebola virus from flying into America on its own.

8)  When you are riding a public bus and notice someone coughing five seats away from you, you no longer jump out the window while simultaneously pulling on latex gloves and a respirator – but only because have completely stopped using public transportation of any kind.

9)  You think that resignation of President Barack Obama is the only thing that could prevent an Ebola epidemic.

10) If someone warns you that the there is an extremely contagious disease out there, a disease that can be transmitted by airborne germs and will kill tens of thousands of Americans this year alone, you feel relieved to learn that it’s just the flu, and not Ebola.

An Ostensibly Funny Commentary* of the Recent News and Events. (* warning! may not actually be funny or a commentary. Also, since I am not quite sure what "ostensibly" means, it might not be "ostensibly" either.) Blogging at listofx.com
View all posts by List of X →
This entry was posted in Humor, List of 10, Satire and tagged Barack Obama, CDC, Ebola, Ebola virus, Ebolaphobia, humor, infectious diseases, satire, United States, West Africa. Bookmark the permalink.

82 Responses to 10 Symptoms Of Ebolaphobia