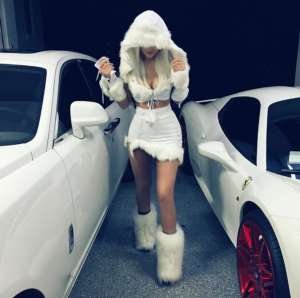 There are many well-known traditions associated with Halloween – carving pumpkins, decorating houses, trick-or-treating, and wearing costumes to Halloween parties. Most of those traditional activities take place on or before Halloween, but there is a relatively recent traditional Halloween activity that takes place immediately after Halloween, namely, looking at the photos of people wearing Halloween costumes and getting outraged about this or that disgraceful Halloween costume being offensive for this or that legitimate reason. Since there are so many different Halloween costumes that can be offensive, here is a list of 10 especially offensive costumes that you should never wear again, and must immediately burn in a fire (started with fair trade organic firewood, of course).

2)  Any costume involving “blackface” (painting the face black to look like African American): This applies to “blackfacing” even a part of a face, such as applying mascara, dark eye shadow or black lipstick.

4)  Ghost or Zombie costume: These costumes promote objectification of dead people. Dead people are people, too, and should never be seen as objects.

6)  Peanuts character costume: Offensive to any person with allergies.

7)  Pirate costume: Since today’s piracy is a big problem off the coast of Africa, a pirate costume is obviously racist.

8)  Luke Skywalker costume: This costume sets unrealistic expectation in boys and teaches them that all problems can be solved by using the force.

9)  Elf, Hobbit, Dwarf, or any other Lord of The Rings-related costume: These reprehensible costumes celebrate the genocide against the Orcs and the near complete eradication of the Orc culture.

10)  Red Riding Hood: This costume manages to be insensitive at once to color-blind people, wolf enthusiasts, vegetarians, and people with gluten intolerance.

Feel free to add more offensive costumes to the list, or, if you don’t know why a certain outfit is offensive, ask me and I will try to explain.

An Ostensibly Funny Commentary* of the Recent News and Events. (* warning! may not actually be funny or a commentary. Also, since I am not quite sure what "ostensibly" means, it might not be "ostensibly" either.) Blogging at listofx.com
View all posts by List of X →
This entry was posted in Humor, List of 10, Satire and tagged Halloween, Halloween outfits, humor, Kardashians, Kylie Jenner, Offensive Halloween costumes, Political correctness, satire, United States. Bookmark the permalink.