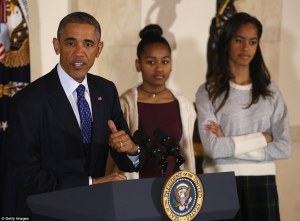 This Thanksgiving weekend, President Obama has pardoned a turkey in a traditional ceremony. However, it wasn’t the President or the turkey who attracted the most attention, but the President’s daughters, Sasha, 13, and Malia, 16, who were visibly frowning and fidgeting throughout the entire televised ceremony. In fact, one Republican political staffer became so incensed by Sasha and Malia’s demeanor and clothing choices, that she posted an angry Facebook rant chastising their behavior and appearance, was immediately criticized for it, apologized, and finally resigned from her job. (So thanks a lot, Sasha and Malia, for piling on even more American job losses). And since the First Daughters would have to face TV cameras many more times in the future, here are 10 new etiquette rules Sasha and Malia must follow to avert any possible Republican outrage about their disrespectful and un-American attitude and attire.

1)  While present at any official functions, you must never act as if you’re bored. Instead, you must always show that you’re outraged by your father’s tyrannical actions. This should not be hard since this is a normal teenager behavior.

2)  You must always wear clothing as modest and non-revealing as possible. A burqa or a niqab would be a good start.

3)  You must always wear an American flag pin to demonstrate your allegiance to the nation. And since this pin might not be visible when you turn away, you must wear another American flag pin on your back, and two more on your shoulders.

4)  You should never stay out too late, and always be home on time. This is one rule you are not taking seriously at all, because you two, and all of your family were supposed to have been back to your home in Chicago by 2012 at the latest.

5)  Do not ever throw temper tantrums. That’s what Congressional Republicans are here for.

7)  You should never argue with adults. Always remember, adults are always right and know better than you or your dad.

9)  No one told you to stop apologizing and move on the next advice. Go back to #8, but not before you’re done apologizing for ceasing your apologizing too early.

10)  To represent the “real” America, you should try to look as white as possible, and judging by your recent photos, you’re not trying hard enough.

An Ostensibly Funny Commentary* of the Recent News and Events. (* warning! may not actually be funny or a commentary. Also, since I am not quite sure what "ostensibly" means, it might not be "ostensibly" either.) Blogging at listofx.com
View all posts by List of X →
This entry was posted in Humor, List of 10, Satire and tagged Barack Obama, Elizabeth Lauten, Etiquette, humor, Malia Obama, Political satire, Politics, Sasha Obama, satire, Thanksgiving, Turkey Pardon. Bookmark the permalink.

104 Responses to 10 Etiquette Rules For Sasha And Malia Obama