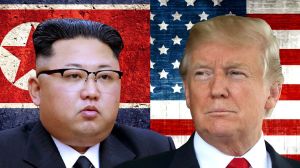 If time allows, Kim Jong Un will also ask Donald for Melania Trump’s phone number – she hasn’t been seen with Donald in public for weeks, so Kim is pretty sure she’s now available.
Image source: CNN

9:00 a.m. – 9:45 a.m.: Nuclear button measuring contest, judged by Dennis Rodman. Bonus points will be given for a working button.

11:00 a.m.: Ribbon-cutting ceremony for the first North Korean McDonalds: of many possible American franchises, North Koreans chose McDonalds, because they want food and they want it fast.

11:40 a.m.: United States and North Korea will sign a free trade agreement. Since North Korea doesn’t really have much of an economy, the US and North Korea are expected to trade compliments, insults, and possibly ballistic missiles.

2:30 p.m.: White House press secretary Sarah Huckabee Sanders will hold a press conference to address a new scandal involving Donald Trump and/or sudden firing of a senior White House official (At the time of setting the schedule, it is not known which scandal and/or senior official it would be, but it is certain that there would be some sort of a brand-new scandal and/or an unexpected firing by 2 p.m..)

3:30 p.m. – 7 p.m.: Donald Trump’s closed-doors bathroom hate-tweeting session. (Due to the time difference between Washington and Singapore, the regular early morning session will be held in the afternoon local time).

5 p.m.-7 p.m.: A lecture/Q&A session “How To Inherit Power From Dad And Get Rid Of The Competition From Annoying Siblings”, by Kim Jong Un for Ivanka Trump, Eric Trump, and Donald Trump, Jr.

11:55 p.m.: The White House is expected to issue an official statement denying that any meeting between Donald Trump and Kim Jong Un ever took place.

An Ostensibly Funny Commentary* of the Recent News and Events. (* warning! may not actually be funny or a commentary. Also, since I am not quite sure what "ostensibly" means, it might not be "ostensibly" either.) Blogging at listofx.com
View all posts by List of X →
This entry was posted in Humor, List of 10, Satire and tagged Dennis Rodman, Diplomacy, Donald Trump, humor, Kim Jong Un, North Korea, Political satire, Russia, satire, Singapore, United States. Bookmark the permalink.