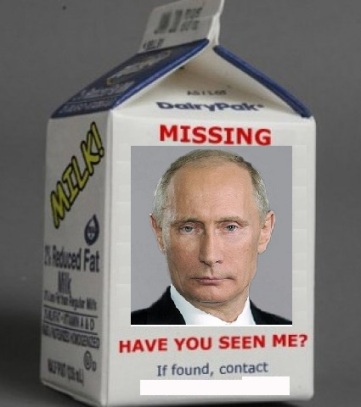 There have been some speculation surrounding the fact that the Russian president Vladimir Putin has not been seen in public for at least a week, and had canceled all of his recent meetings and appearances. It has been rumored that Putin may have died, or is having serious health issues, and the Russian government has been busy fighting these rumors. According to the Kremlin spokesman Dmitry Peskov, there is nothing to worry about, President Putin’s health is great, and his handshake is so firm that he can break someone’s hand. So here are 10 theories explaining the disappearance of President Putin.

1)  Vladimir Putin accidentally shook his left hand with his right hand and is in a hospital with multiple bone fractures.

2)  He has discovered Netflix.

3)  Olympic gymnast Alina Kabaeva, who is rumored to be Putin’s girlfriend, just had a baby, and a lot of men tend to disappear in this situation.

5)  Vladimir Putin is definitely not fighting in Ukraine, not capturing key Ukrainian cities, and not single-handedly winning defensive victories there.

6)  Vladimir Putin has gone into hiding when the investigators of a recent high-profile murder of the opposition leader Boris Nemtsov have announced that they are close to capturing the killer – to avoid distracting the investigators from their work, obviously.

7)  President Putin had temporarily died and is currently resurrecting himself to officially attain the status of God of Russia. Also, after being reborn as a new man, he will become eligible to run for three more presidential terms.

9)  Some of Russia’s sovereign debt is overdue, and Putin is hiding from the collection agencies.

10)  As they used to say at the KGB, Russia is a big country; people disappear all the time.

An Ostensibly Funny Commentary* of the Recent News and Events. (* warning! may not actually be funny or a commentary. Also, since I am not quite sure what "ostensibly" means, it might not be "ostensibly" either.) Blogging at listofx.com
View all posts by List of X →
This entry was posted in Humor, List of 10, Satire and tagged Alina Kabaeva, humor, Political satire, Putin's disappearance, Russia, satire, Ukraine, Vladimir Putin. Bookmark the permalink.