10 Reactions To Nuclear Deal With Iran 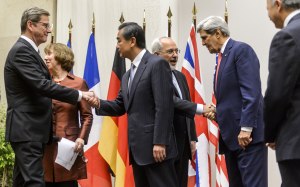 The exhausted negotiators are finally saying their goodbyes, until they have to meet for the next round of talks beginning in about 30 minutes.
Image source: Al Jazeera

Last week, after weeks of non-stop negotiations in Switzerland, the United States, Iran, and several other countries had agreed to a deal that is supposed to prevent Iran from getting a nuclear bomb. Actually, to be more accurate, what the countries had agreed on was to agree to negotiate an agreement by June 30 to prevent Iran from getting a nuclear weapons within 15 years – which still a huge progress from the 2013 agreement which was a deal to negotiate a compromise on having an agreement on meeting with Iran to talk about stuff. The current deal is intended to stop most of Iranian enrichment activities for at least 15 years and allow the International Atomic Energy Agency inspectors to oversee the Iran’s nuclear facilities – but, of course, this isn’t the actual deal. Here are 10 reactions to… whatever this is.

1) Ayatollah Khamenei, Supreme Leader of Iran: Our plan is to keep annoying the United States with non-stop negotiations, talks, meetings, agreements, conferences, compromises, arrangements, discussions, summits, and deals, until the Americans give up and just give us the nuclear bombs just so they wouldn’t have to deal with us anymore.

2) 47 Republican Senators who wrote Iran a letter demanding that they stop negotiating: We are outraged that Iranians had ignored our letter. We’re already composing a nasty text message, if that doesn’t work, we’ll stalk Iran on Facebook and Pinterest!

3) President Barack Obama: Israel has expressed their concerns that the deal isn’t actually going to stop Iran from creating nuclear weapons. But I give my solemn promise that Israel has no reason to worry about Iran’s nuclear attack for as long as I am president!

4) Kim Jong Un, Supreme Leader of North Korea:  We congratulate Iran on winning a 15-year extension in their deal, because when you’re building a nuclear bomb, it could be very dangerous to rush things.

5) Hassan Rouhani, President of Iran: This deal will lift the sanctions and will finally open the gates for the biggest Iranian exports, oil and terrorism. However, it’s too early to celebrate before the agreement is finalized – as we say in Iran, the Great Satan is in the details.

6) IAEA inspectors: We have not been given the access to every Iranian nuclear enrichment site, but the early signs are very encouraging: the Iranians have already allowed us to inspect a zoo, a movie theater and a beach, and we have found no suspicious activity there.

7) Republican Senator John McCain: I have always been calling for the United States to pull out of the negotiations and just bomb Iran. But you know, I’m actually glad we have a peace deal, because now Iranians will never expect us to bomb them.

8) Ben Ki-moon, UN Secretary General: While the United Nations is heartened by the news of the agreement, we are disappointed by the slow pace of negotiations. Since we want to complete the next round of talks on time, we will no longer hold these talks in a nice place like Switzerland, but will instead schedule the next round in a place like Somalia, Antarctica, or Detroit.

An Ostensibly Funny Commentary* of the Recent News and Events. (* warning! may not actually be funny or a commentary. Also, since I am not quite sure what "ostensibly" means, it might not be "ostensibly" either.) Blogging at listofx.com
View all posts by List of X →
This entry was posted in Humor, List of 10, Satire and tagged Barack Obama, Diplomacy, humor, Iran, Nuclear deal with Iran, Political satire, satire, United States, War with Iran. Bookmark the permalink.

60 Responses to 10 Reactions To Nuclear Deal With Iran