10 Activities That Can Land You On Terrorist Watch List 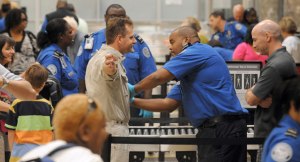 And the best thing about not flying is that you can skip this fun activity.
Image source: politico.com

Many people are afraid to fly – and with all the news about Malaysian Airlines flights and few other recent plane crashes, it seems like flying on an airplane is more dangerous than ever. Thankfully, the US Department of Homeland Security is running a program intended to save thousands people from having to fly ever again, better known as the “No Fly list”. Officially, the No Fly list is based on the list of suspected terrorists, and you may not feel like you could be eligible for this exclusive program. Luckily, according to a recent article, the US government is very generous with the “suspected terrorist” designations, and doesn’t even require concrete facts for you to be added to the terrorist watch list, just a reasonable suspicion. Here are 10 activities that can help you get on the list.

2) Visiting Google.com – because this is the most popular site that terrorists use to find information on how to make bombs.

3) Have a weird Muslim-sounding name. Just watch what happens in 2017 when Barack Hussein Obama can no longer fly Air Force On and has to board a commercial flight back home.

5) Buying fertilizers. Even if you’re not actually buying the chemicals to make explosives or grow weed, then you’re must be trying to grow your own vegetables. However, by growing your own food, you’re undermining the American agricultural industry and sabotaging the US economy as a whole.

6) Carrying a bottle of water: packing objects that are deemed too dangerous to be taken on board of an airplane naturally raises plenty of suspicion even when you’re not actually flying.

8) Buying underwear: since someone once used underwear to hide a bomb, all underwear purchases are now closely watched. And no, I don’t mean closely watched by that weird guy hanging out at Victoria’s Secret and pretending to look for something for his non-existent girlfriend.

Hat tip to eideard.com for the story.

An Ostensibly Funny Commentary* of the Recent News and Events. (* warning! may not actually be funny or a commentary. Also, since I am not quite sure what "ostensibly" means, it might not be "ostensibly" either.) Blogging at listofx.com
View all posts by List of X →
This entry was posted in Humor, List of 10, Satire and tagged Air travel, Homeland Security, humor, No Fly List, satire, terrorism, Terrorist Watch List, United States. Bookmark the permalink.