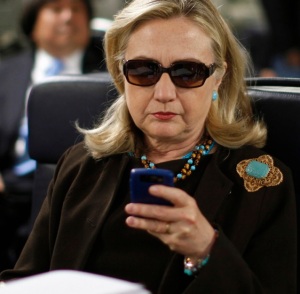 “Note to self: fire James Comey…. Wait… Is this already on Wikileaks?”
@DefinitelyNotARussianHacker: “Da.”
Image source: hacked from AP

Last weekend, there was a new shocking development in the 2016 presidential election: James Comey, head of the FBI, informed Congress that FBI had seized a laptop belonging to serial sexter Anthony Weiner and his wife, top Clinton aide Huma Abedin, and found thousands of emails that may or may not be relevant to the FBI’s investigation of Hillary Clinton’s private email server. Of course, since there are only a few days before election, this revelation has caused a Samsung phone-like explosion, with Republicans once again demanding that Hillary Clinton is immediately imprisoned regardless of the outcome of the investigation, and Democrats blaming the FBI for conspiring with Russia and Wikileaks to help Donald Trump win the election. Here are 10 reactions to the Emailgate and the FBI investigation.

1)  Francois Hollande, President of France: “Ah, so the American Department of State had sent out official messages from the Anthony Weiner’s laptop. Finally, an explanation to why certain official State Department’s emails sometimes contained a close-up photo of a man’s penis.”

2)  Danny Ellison, Tump supporter: “Stupid libtards keep saying Trump is Hitler, Hitler this, Hitler that! Well, you can say what you want about Hitler, but at least Hitler didn’t use a private email server!!”

3)  Michael Kortan, FBI spokesperson: “According to the recently adopted FBI policy, whenever FBI obtains a laptop in connection to any crime committed by any American or foreigner, and discover any e-mails on it, the Bureau will immediately re-open the investigation of the Clinton e-mail server and will promptly inform the American public about it, ideally right before an election.”

4)  Kellyanne Conway, Donald Trump campaign manager: “These new emails just confirm despicable duplicity and dishonesty by Hillary Clinton: while presenting a cold and calculating facade in public, she was actually trying to help people behind the scenes! Disgusting!”

5)  Vladimir Putin, President of Russia: American media accuses Russia of hacking Clinton emails and meddling in American election to help Donald Trump who is brilliant man and strong leader! This is absolutely false accusation! Russia has nothing to do with hacked emails posted on Wikileaks, and nothing to do with additional shocking emails that  someone will post there tomorrow!”

6)  Newt Gingrich, former US speaker/morality expert: “It’s disgusting to think that Hillary Clinton knew about Anthony Weiner molesting teenagers and did nothing! And of course Hillary had to know about this, because whenever Anthony Weiner is sexting anyone, he is always sexting everyone else who has a Twitter account!”

7)  Abacha Tunde, Prince of Nigeria: “Dear Mr. Hillary Clinton; I have continued diligentely expecting response on the urgent matter of your help in the helping acessing to $57,100,100 (fifty seven million one hundred thousand one-hundred U.S. dollar) on my deceased unlcle Prince Osagie Tunde assets account in exchange for your services generouslyy compensated at $15,200,000. I was fearing our request was being lost, but thankfully to the fastidious looking of Federal BI I now am hopeful you now shall locate the originatory query and respond positively.”

8)  Fox News: “A shocking new discovery in the new cache of Clinton emails reveals that Hillary Clinton was in talks to to accept a $15 million bribe to facilitate a $57 million transfer to Nigeria, clearly to finance the Nigerian terrorist organization Boko Haram!”

10)  Donald Trump, Republican presidential candidate: ……. (There was no reaction from Donald Trump, since someone finally explained to him that the less he talks, the better it is for his campaign.)

An Ostensibly Funny Commentary* of the Recent News and Events. (* warning! may not actually be funny or a commentary. Also, since I am not quite sure what "ostensibly" means, it might not be "ostensibly" either.) Blogging at listofx.com
View all posts by List of X →
This entry was posted in Humor, List of 10, Satire and tagged Clinton emails, Donald Trump, elections, Emailgate, FBI, Hillary Clinton, James Comey, Political satire, Politics, Russia, satire, United States. Bookmark the permalink.