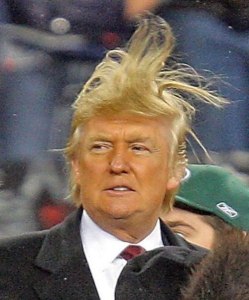 During his tour of a Carrier factory, Donald Trump personally tested a Carrier air conditioner.

Last week, Donald Trump has announced that thanks to his amazing deal-making skills he had persuaded Carrier Corporation to change its decision to outsource a thousand jobs from its Indiana plants to Mexico, and keep these jobs in the United States instead. A few days later, Carrier announced that they will be getting $7 million worth of tax breaks from Indiana as the part of the deal and will still outsource (or as they call it, “export”) 1,300 jobs from Indiana to Mexico. Although many people don’t see how all this makes an amazing deal for America, this was obviously a very complicated deal with a lot of moving parts and many stakeholders, and only someone with the yuuge brainpower of Donald Trump could have arranged something as tremendous as this amazing deal. Just so that the rest of us could appreciate the pure deal-making genius that was required, here are 10 lesser-known arrangements that have been included in this amazing deal.

1)  Carrier Corporation will become official supplier of cooling and heating systems to the White House. Therefore, whenever sh!t would hit the fan for the Trump administration, it would be a Carrier fan.

2)  Mexico: After getting 1300 jobs, Mexico made it clear to the Trump administration that if Donald Trump continues to fight the outsourcing of American jobs to Mexico as successfully as in this deal, they might just be willing to pay for that border wall as a sign of gratitude.

3)  All Americans will receive free 950 additional hours of TV coverage of Donald Trump bragging about how amazing he is at everything.

4)  The cast of hit Broadway musical Hamilton: Although recently Donald Trump has placed the Hamilton actors at the top of his enemies list for mortally insulting Vice President-elect Mike Pence by daring to address him from the stage, as a part of the deal Donald Trump will agree to forget his feud with the musical. This arrangement was inserted at the insistence of Donald Trump’s three minute attention span.

5)  State of Indiana: Since outgoing governor Mike Pence and other top Republican leaders of Indiana are big proponents of the idea of a smaller government, they will be $7 milion closer to their dream.

6)  Indiana taxpayers: Although they will have to subsidize Carrier with $7 million in tax breaks, getting rid of Mike Pence has to be worth much more than that.

7)  U.S. Chamber of Commerce: Since Carrier still ends up “exporting” 1300 jobs, they get to claim that Donald Trump is already increasing American exports.

8)  Trump voters: They get a sense of vindication and satisfaction for their vote, because Donald Trump is already making good on his promise to end business as usual. While “business as usual” meant that companies used to simply outsource jobs, now they will be getting millions of dollars to outsource jobs.

9)  1,300 Carrier workers whose jobs were “exported”: Thanks to Donald Trump’s supreme negotiation skills, he immediately negotiated away the idea of executing these people and convinced Carrier to merely let them go to fend for themselves.

10)  United Technologies, a parent organization of Carrier and a major US defense contractor: Received assurances from Donald Trump that he will do everything in his power to steer more military contracts towards United Technologies, up to and including starting a World War III.

An Ostensibly Funny Commentary* of the Recent News and Events. (* warning! may not actually be funny or a commentary. Also, since I am not quite sure what "ostensibly" means, it might not be "ostensibly" either.) Blogging at listofx.com
View all posts by List of X →
This entry was posted in Humor, List of 10, Satire and tagged Carrier corporation, Carrier deal, Donald Trump, Hamilton, humor, Indiana, Mexico, Mike Pence, outsourcing, Political satire, Politics, satire, United States, United Technologies. Bookmark the permalink.