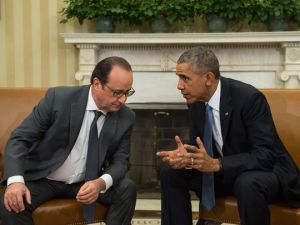 “So, Francois, I know we’re talking terrorism and this is a little off-topic, but check out how big my hands are compared to Donald Trump’s!”
Image source: USAToday

While everyone is so busy watching Donald Trump’s antics, you might have missed a new White House scandal that’s brewing! During a meeting with Barack Obama at the White House, French president Francois Hollande used the words “Islamist terrorism”, which mysteriously disappeared from the video and audio recordings of the speech posted by the White House, although the words appeared in the posted text transcript and the corrected video posted by the White House hours later. Both Hollande and Obama claim that this was due to a technical issue, while the conservatives are outraged because this obviously has to be another example of political correctness run amok. But you know you can count on me to dig deeper and provide 10 real reasons why the words “Islamist terrorism” disappeared from Hollande’s speech, so here they are:

2)  FBI hack of the San Bernardino shooter’s iPhone caused a system-wide malfunction across many i-products, including iSlamist Terrorism.

3)  It was a deliberate decision by the top White House staff to remove the words from the French President’s speech because America cares about our relationship with Islamic-majority allies much more than we care about our French allies. (No offence, France, but how much oil do YOU have?)

4)  It was a deliberate decision made by low-level staffers: the Obama administration is so laid-back and relaxed that White House’s audio engineers are allowed to set their own foreign policy.

5)  According to credible CIA and NSA sources, saying “Islamic terrorism” out loud may conjure the spirit of Osama bin Laden.

6)  The White House audio engineers are paid by the word, and the government just could not justify paying taxpayers dollars for “Islamist Terrorism”.

7)  Hollande was talking way too fast for the White House interpreter to type every word into Google Translate.

9)  It really was a technical issue: technically, Hollande said it, and Obama had an issue with that.

10)  After months of media focusing solely on Donald Trump, the White house staff felt undeservedly left out and ignored.

An Ostensibly Funny Commentary* of the Recent News and Events. (* warning! may not actually be funny or a commentary. Also, since I am not quite sure what "ostensibly" means, it might not be "ostensibly" either.) Blogging at listofx.com
View all posts by List of X →
This entry was posted in Humor, List of 10, Satire and tagged Donald Trump, France, Francois Hollande, Hollandegate, humor, Islamist terrorism, Political satire, Politics, satire, terrorism, United States, White House. Bookmark the permalink.