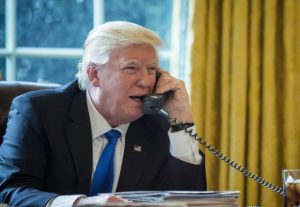 “We’ll get to your son in a minute, but have you heard how big the crowds at my inauguration were? Huge, tremendous crowds, biggest in history!”
Image source: thesun.co.uk

Recently, yet another Trump-related controversy has erupted as Donald Trump has accused former presidents Obama and George W. Bush of never calling the families of soldiers killed in the line of duty to express their condolences. Patting himself on the back, Trump said that he likes to call when it’s appropriate (although, judging by his Twitter feed, it’s not clear if Donald Trump actually knows the meaning of the word “appropriate”). However, recordings of many of Donald Trump’s tremendously compassionate calls out to the families of the fallen soldiers have been leaked to this blog. Here are 10 of them.

1)  “Let me just start by saying that this is a very difficult call for me to make. I’m at a golf course right now, tremendous golf course, first class, but the phone connection is a total disaster here, so you have no idea how unbelievably difficult this was for me to call you. Anyway, your son’s dead, oh, and I gotta get back to the game now. MAGA!”

2)  “…I want to thank your son for his service to me, I mean, to the United States of America, even though he’s Puerto Rican. What? Puerto Rico is America? That’s fake news! Really? Seriously, no one knew Puerto Rico was part of America!..”

3)  “…Just wanted to give my warmest condolences because I heard your son got killed. Although, honestly, I like those who don’t get killed…”

4)  “…This your president Donald Trump speaking… what do you mean, this isn’t a good time for you to talk right now?… What funeral? I call when it’s appropriate for me, and I don’t know why you people keep crying and having funerals when I call you, but when the president of the United States of America is calling you, it’s kind of a big deal! You people should be grateful and honored!”

5)  “…I got kids of my own, you know. Great kids. They got amazing genes, really smart, so they didn’t want go to the military like your kid…”

6)  “…You should be honored that your family’s death toll was just one, not like a real disaster like the World War Two or Three!”

7)  “…They showed me your girl’s picture, she was a pretty good-looking one. Tremendous body. At least an eight, maybe even a nine. Definitely not a ten, though. Does she have a younger sister? I bet she’s even hotter. But not as hot as Ivanka. I’d still date her, probably. Just don’t tell my wife Menalia or what’s-her-name…”

8)  “…I just want to say that I really appreciate your kid’s sacrifice. If there’s anything your family needs, like a border wall, a Muslim ban, a tremendous tax cut on estates, I can make it happen. I can throw in some paper towels, too, people in Puerto Rico loved them…”

9)  “…So this is very sad news, I mean, these military funerals are expensive, and we got all this yuge hundred trillion dollar debt from Obama, a total failure as the president, by the way, worst president ever, but we’re getting this amazing, unbelievable growth, so this is totally unfair that we have to increase our debt to pay for your funeral…”

10)  “…Hi, it’s me, just leaving a message since I haven’t been able to reach you. I’m gonna need your guys again to hack a bunch of total crooks, yuge pains in the ass, and maybe the failing CNN and New York Times, and I’ll owe you, as usu… What? This isn’t Putin’s number? Who did you dial? Some soldier? Ah, fu…” (dial tone)

An Ostensibly Funny Commentary* of the Recent News and Events. (* warning! may not actually be funny or a commentary. Also, since I am not quite sure what "ostensibly" means, it might not be "ostensibly" either.) Blogging at listofx.com
View all posts by List of X →
This entry was posted in List of 10, Satire and tagged Barack Obama, Donald Trump, Gold Star Family, Political satire, Politics, Puerto Rico, satire, United States, US military. Bookmark the permalink.